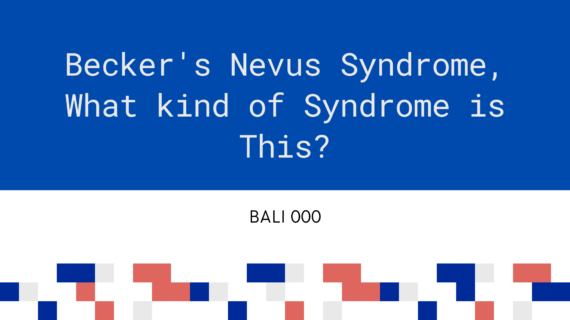 Becker’s Nevus Syndrome – A simple nevus but many distributed to our body may not be so disturbing. But, how could it be? If those nevus appeared only on one side of your body following hypertrichosis?

Becker’s nevus syndrome (BNS) is characterized by the simultaneous occurrence of a circumscribed patch of light or dark brown hyperpigmentation with a sharply outlined but irregular border (resolving into small spots reminiscent of an archipelago) and hypertrichosis (the so-called Becker’s nevus).1,2

Becker’s nevus was first described  by Becker in 1949. Happle in 1997, described Becker’s nevus syndrome or hairy epidermal nevus syndrome, where BNS was associated with multiple skin and musculoskeletal(is made up of bones, muscles, joints, tendons and ligaments which all work together to provide the body)  abnormalities, mostly on the same side. Becker nevus usually presents as numerous macules, especially located unilaterally(only on one side) on the trunk and shoulders. It mostly appears in the adolescent period, being five times more frequent in men than in women.3

Also Read What is Sudden Death? is it Necessary to Watch Out?

The nevus is characterized by the presence of light or dark brown macule with a sharply outlined but irregular and bizarre borders that resolve into small spots reminiscent of an archipelago.4 Becker’s Nevus mainly appears in the first and second decades of life, sometimes after sun exposure, and it is rarely described at birth.

Most lesions are one side of the body area, localized to the upper quadrant of the chest and shoulder, but they can be found on any area of the body including the forehead, face, neck, lower, trunk, extremities, and buttocks.5,6,7   After its appearance, Becker’s Nevus may grow for a year or two but then remains fixed in size. In the course of time, pigmentation can fade however.6

Another Becker’s nevus manifestation has reported in some cases unilateral hypoplasia(incomplete development/underdevelopment of an organ or tissue) of the breast. Both men and women are equal in prevalence, but this manifestation is more seen in women.

A case report: A 24-year old woman was presented with a brown discoloration which initially appeared as a little spot on her left breast 11 years ago and then expanded with time. IN addition, the underlying left breast tissue had not grown during the peripubertal period(the 40-60 days period before first ovulation when a majority of these dynamic changes occur is referred to as the peripubertal period). From USG and MRI of the left breast showed hypoplasia.8

A case of 14-year-old boy with Becker’s nevus presented with abnormal symptoms including an asymmetric face, hemi maxillary enlargement, and abnormal teeth, all constituents of HATS syndrome.9 HATS or hemi maxillary enlargement, asymmetry of the face, tooth abnormalities, and skin findings is a rare developmental disorder involving the first and second branchial arches.

Bone and muscle anomalies are frequently observed. They can include scoliosis(is a medical condition in which a person’s spine has a sideways curve. The curve is usually “S”- or “C”-shaped over three dimensions.). Vertebral defects (including hemivertebrate  and spina bifida occulta, fused or accessory cervical ribs(A cervical rib is an extra rib that forms above the first rib, growing from the base of the neck just above the collarbone), pectus excavatum (is a condition in which a person’s breastbone is sunken into his or her chest)  or carinatum (or pigeon chest is when part of your child’s breastbone is pressed outwards or raised up), asymmetry of scapulae(also known as the shoulder blade), short limb or other forms of limbs asymmetry, bilateral tibial torsion(is the twisting of a child’s shinbone, also known as the tibia and caused a toddler’s legs and feet to turn inward, giving them a pigeon-toed appearance), ipsilateral hypoplasia of the shoulder girdle (including absence of the pectoralis major muscle/large muscle in the upper chest, fanning across the chest from the shoulder to the breastbone), hypoplasia of the sternocleidomastoid muscle, and umbilical hernia.10, 11, 12, 13

A 15- year old female patient presented with a large dark-colored patch over genitals, upper and inner aspects of both the thighs, and in front of the neck.

The exact cause of Becker’s Nevus remains unclear. There are 2 main hypotheses concerning this disorder. First, genetics. Genetic associates the syndrome with the occurrence of a postzygotic autosomal fatal mutation(is a change in an organism’s genome  that is acquired during its lifespan, instead of being inherited from its parents through fusion of two haploid gametes  that can “survive” only in a mosaic pattern: it is corroborated by the fact that the majority of cases are sporadic and familial grouping is very rare, similar to what happens in other neurocutaneous phenotypes.

The second hypothesis states that BNS is a hormone-dependent disorder; this theory is based on the increased number of androgen receptors  in the affected areas: for this reason, the appearance of lesions is more frequent in puberty, and alteration such as hypertrichosis and acneiform eruptions are restricted to the regions.15, 16, 17, 18

There is no special treatment for treating BNS. Therefore, patients should be recommended to come to regular clinical follow up to examine whether any associated abnormalities are developed in time. Although patients may feel significantly disturbed because of the conspicuousness of BNS, therapeutic modalities are limited. The treatment is essentially cosmetic. Potential therapeutic options include electrolysis , waxing, makeup, or laser treatment.19

There is also medication that is used for treating hormonal problems such as Spironolactone . Spironolactone is an antiandrogen used in other dermatological diseases due to the hormonal action. In relation to breast hypoplasia, its action is not fully understood but has been proposed to respond to negative feedback of androgen receptors. In a dosage of 50 mg/day, improvement of breast hypoplasia has been described.20

In some cases, breast hypoplasia and bone abnormalities, such as scoliosis, were corrected surgically.21