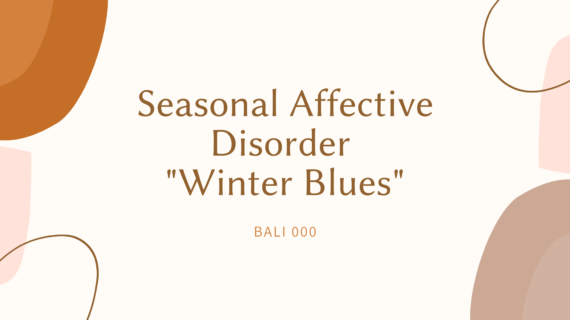 Seasonal affective disorder is a form of depression also known as SAD, seasonal depression or winter depression.2. Many people may experience mood changes begin and end when the seasons change.

In most cases, SAD symptoms start in the late fall or early winter and go away during the spring and summer; this is known as winter-pattern SAD or winter depression. Some people may experience depressive explodes during the spring and summer months; this is called summer-pattern SAD or summer depression and is less common. The occurrence and nature of seasonal rhythms in humans has received renewed interest since Seasonal Affective Disorder (SAD) was diagnosed in 1984.3(SAD Endocrinology journal)

An estimated 10 to 20 percent of recurrent depression cases follow a seasonal pattern. Although a summer pattern of recurrence is possible, the predominant pattern involves fall/winter depression with spring/summer remission. In U.S. community surveys, SAD prevalence ranges from 9.7 percent in New Hampshire to 1.4 percent in Florida. In North America, SAD prevalence increases with latitude, but the correlation is nonsignificant in other parts of the world.4(SAD Overview journal)

SAD is not considered a separate disorder but is a type of depression characterized by its recurrent seasonal pattern. Therefore, the signs and symptoms of SAD include those associated with major depression, and some specific symptoms that differ for winter-pattern and summer-pattern SAD. Not every person with SAD will experience all of the symptoms listed below.

Symptoms of major depression may include:

● Feeling depressed most of the day, nearly every day

● Losing interest in activities you once enjoyed

● Experiencing changes in appetite or weight

● Having problems with sleep

● Having frequent thoughts of death or suicide

For winter-pattern SAD, additional specific symptoms may include:

● Overeating, particularly with a craving for carbohydrates

Specific symptoms for summer-pattern SAD  may include:

How is SAD Happen?

Many studies shows there are connection between the season changes and hormonal level in human body, especially hormone that arrange human’s mood like serotonin and melatonin  which is work to maintain our sleep-wake cycle. But pathogenic theories for SAD have focused on neurotransmitters, hormones, circadian rhythm dysregulation, genetic polymorphism, and psychological factors.(SAD overview).

The phase-shift hypothesis proposes that the body’s sleep-wake cycle is phase-delayed in SAD with respect to the environmental light dark cycle, and is based on observations of delayed onset of sleep, melatonin, body temperature, and cortisol rhythms in some SAD patients. Individuals with SAD may respond to longer nights in winter with an extended duration of nocturnal melatonin release, a hormone that can promote sleep. When measuring active melatonin secretion under constant dim light, Wehr, et al.,21 found that individuals with SAD had a longer duration of melatonin release during winter than summer whereas controls did not. This is analogous to the lengthened duration of melatonin release in some mammals that signals seasonal changes in reproductive activity. It is possible that only humans with SAD have retained the ability to track seasons in this way, which might explain the seasonal presentation of SAD. Recent etiological models have attempted to integrate biological and psychological mechanisms in explaining SAD onset and maintenance. Young’s dual vulnerability model proposes two separate vulnerabilities among individuals with history of SAD: 1) a physiological vulnerability to experience atypical symptoms during the winter and 2) a psychological vulnerability to develop cognitive and affective symptoms of depression in reaction to the vegetative symptoms. Young devised this hypothesis based on his finding that individuals with SAD retrospectively recounted onset of fatigue, hypersomnia, and increased appetite prior to developing cognitive and affective symptoms. Different pathophysiological mechanisms may account for the different vulnerabilities proposed, leading to heterogeneity of findings from studies addressing the etiology and treatment of SAD.

Can SAD be cure?

Yes, it can be cured. Therefore, it needs a holistic treatment plan. Not only medication, but each area that contribute to be the cause of SAD must be treated as well. Treatments are available that can help many people with SAD. There are three main categories of the therapy :

Since the 1980s, light therapy has been a mainstay for the treatment of SAD. It aims to expose people with SAD to a bright light every day to make up for the diminished natural sunshine in the darker months.

For this treatment, the person sits in front of a very bright light box (10,000 lux) every day for about 30 to 45 minutes, usually first thing in the morning, from fall to spring. The light boxes, which are about 20 times brighter than ordinary indoor light, filter out the potentially damaging UV light, making this a safe treatment for most. However, people with certain eye diseases or people taking certain medications that increase sensitivity to sunlight may need to use alternative treatments or use light therapy under medical supervision. (Journal from NIH). A pooled analysis of light therapy studies 40 concluded that 53.3 percent of individuals with SAD met criteria for full remission with light therapy. However, only 43 percent of individuals with moderate to severe SAD symptoms remitted with light therapy. (SAD overview)

Clinically, antidepressants drugs are frequently used as an alternative to light therapy. (sad overview). Five-center Canadian study found comparable remission rates for light therapy plus pill placebo (54%) and fluoxetine  plus dim light placebo (50%). In a retrospective analysis of SAD outpatients in Finland, 73% of eight patients treated with moclebemide and 61 percent of 11 patients treated with fluoxetine responded over 6 weeks. Eight women with SAD due to randomized study had combined light therapy and citalopram or light therapy or light therapy and placebo found no difference in the two conditions at post-treatment, but greater efficacy for combination treatment 34 weeks later. (SAD overview)

Exercise and light therapy were associated with similar and significant reductions in depression severity and an increased rate of oxygen consumption relative to an untreated control group, suggesting that normalization of daily energy expenditure may underlie the efficacy of both treatments. Although morning exercise might be beneficial in the treatment of SAD, based on the assumption that it would induce a phase advance, these results suggest that the timing of exercise may not be important to the antidepressant effects of exercise on SAD. However, exercise late at night might be contraindicated in SAD because it can lead to a phase delay in the onset of melatonin release the following night in humans.56 In healthy controls, aerobic exercise performed under bright (2,500- to 4,000-lux) lights appears to be more beneficial than either exercise under typical indoor lighting or no exercise for atypical symptoms and vitality.