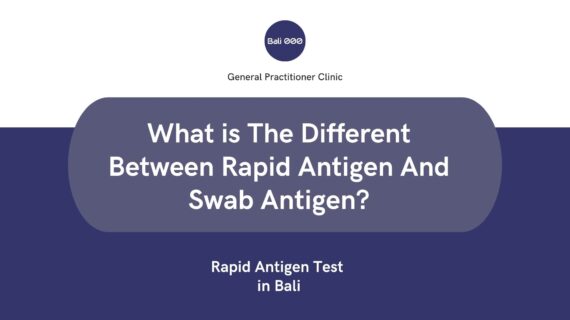 Rapid Antigen Test in Bali – Currently, there are several types of tools to deal with the Corona virus with their respective advantages and disadvantages. However, not a few people confuse one type of test with another.

Recently, the World Health Organization (WHO) suggested a rapid test antigen as a test that could be used to treat the corona virus. However, because there are also those who call the test an ‘antigen swab’, not a few people end up confused. Are the rapid test antigen the same as the swab antigen, or are they two different tests? Don’t get misunderstood, find out first the answer here.

Rapid antigen and swab antigen the same type of test. It is called a rapid antigen test, because the test to detect the corona virus can provide a fast diagnosis, which is only 15 minutes.

While others call it an antigen swab, because the test is done by means of a swab or swab to take samples of secretions from the nose and throat.

However, both the antigen rapid test and the antigen swab test are the same types of antigen tests designed to detect specific proteins from the virus that elicit an immune response.

Get to know the Rapid Antigen Test

An antigen test is an immune test that functions to detect the presence of certain viral antigens that indicate a current viral infection. Rapid antigen tests are commonly used to diagnose respiratory pathogens, such as the influenza virus and respiratory syncytial virus (RSV).

However, the United States Food and Drug Administration (FDA) authorizes emergency use (EUA) for antigen testing as a test to identify SARS-CoV-2.

The antigen test is also relatively inexpensive and can be used in treatment settings. This authorized device can also provide a diagnostic result in about 15 minutes. However, the rapid antigen test is generally less accurate than the viral test which detects nucleic acids using the polymerase chain reaction (PCR) or also known as the PCR test.

Even so, the rapid antigen test, also known as the antigen swab, helps screen people to identify those who need a more definitive test.

How Does the Rapid Antigen Test Work?

Antigen is a molecule capable of stimulating an immune response. These molecules can be proteins, polysaccharides, lipids, or nucleic acids. Each antigen has a distinct surface feature that the immune system recognizes.

SARS-CoV-2, the virus that causes COVID-19, has several known antigens, including nucleocapsid phosphoproteins and glycoprotein spikes. An antigen rapid test can reveal if a person is currently infected with a pathogen such as the SARS-CoV-2 virus. Unlike the PCR test which detects the presence of genetic material, the rapid antigen test detects proteins or glycans, which are like the spike proteins found on the surface of SARS-CoV-2.

The rapid antigen test works best when the person is tested in the early stages for SARS-CoV-2 infection, where the viral load is generally highest. This test is also useful for diagnosing people who are known to have a high risk of being exposed to the coronavirus.

In addition, the rapid antigen test is also used as a screening test where repeated testing can quickly identify people who are infected with SARS-CoV-2, so that infection prevention measures can be taken immediately. However, if the results are found to be positive, doctors still need to do a PCR test to confirm the diagnosis.

Rapid Antigen Test in Bali is now can be done in Bali000, if you wan to get special offers about rapid test antigen Bali, you can contact us or visit our clinic.